Cani (2007, 2007a, 2008, 2009) demonstrated in their research that adding to the diet soluble fibers such as inulin (such as the inulin oligofructose chains found in the Original Synbiotic, the Beta Glucan Synbiotic and the No. 7 Systemic Booster) stimulates the growth of Bifidobacteria sp., which caused a reduction in gut permeability, thereby reducing the levels of LPS systemically, and resulted in weight loss and reduced metabolic disorders. 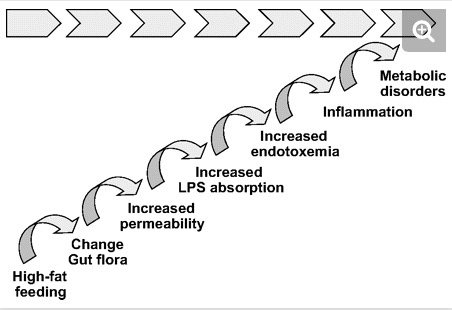 High-fat diets increases insulin resistance (IR) and the risk of developing metabolic diseases such as obesity and diabetes.

The consequence of insulin resistance will favor hyperinsulinemia and excessive hepatic and adipose tissue lipid storage.  And, adipose tissue presents increased expression and content of pro-inflammatory cytokines such as TNF-a, IL-1 (3,4) and Il-6 (4).

Importantly, a high-fat diet for 4 weeks resulted in significant modulation of dominant bacterial populations within the intestinal microbiota. Shifting to a higher percentage of gram-negative bacteria over gram-positive bacteria.  In particular they found a lowering of the gram-positive Bifidobacterial levels, which cause an increased opening within the tight junctions, allowing for more LPS from the gram-negative bacteria to pass into the plasma.

Cani et al. (2007a) found that adding inulin to the high-fat feed of the research animals, increased the Bifido levels in their colon, which tightened the junctions and reduced the LPS systemic levels.

Select from any one of the following Synbiotic products.  They also can be alternated from dose to dose.

All of these formulas contain ample amounts of organic chicory root derived inulin and the probiotic bacteria Bifido longum found in the research of Cani et al. to facilitate the reduction of entoxemia, and thereby reducing a contributing factor in obesity and diabetes.