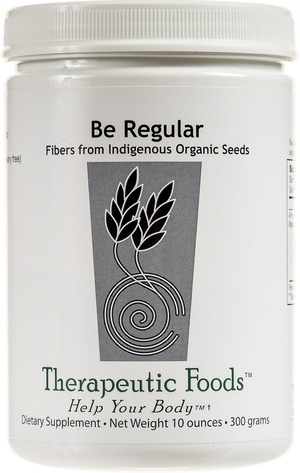 A daily regular bowel movement is a difficult subject to discuss and hence remains a mystery: How do we achieve optimal bowel regularity?

Eating adequate amounts of soluble and insoluble dietary fiber is shown in research to increase bowel movement frequency and confer preventative support to chronic conditions, such as cardiovascular, fatty liver, diabetes and more.*

Be Regular is a gluten free, global blend of indigenous organic seeds, originating in ancient cultures from all around the world. The five organic seeds provide gentle yet effective fiber for everyday regularity.*

One scoop of Be Regular offers over 7 grams of fiber towards your 25 to 35 grams a day.*

Daily fiber intake is shown in research as one of the most important health requirements. However, optimum levels are rarely achieved, most Americans only consume about 15 g of fiber instead of the recommended 25 grams of fiber for adult women and 38 grams of fiber for adult men (American Dietetic Association, 2008; Kranz et al., 2017). Eating enough fiber is important for our physical health but also our financial health. A Canadian research team discovered that eating enough dietary fiber enhances health and reduces costs for health care (Abdula et al., 2015). This conclusion aligned with the research of Schmier et al. in 2014. The position of the American Dietetic is based on epidemiologic studies showing fiber offers protection against several chronic diseases such as cardiovascular, including blood pressure, lipid levels, and inflammation (p. 1719-20; Gabrial et al., 2016; Cooper et al., 2017). Data also show a correlating relationship between dietary fiber and cancer with studies supporting the theory that dietary fibers offer protection against cancer (ADA, 2008, p. 1723).*

Be Regular is a global blend of dietary fiber that is comprised of indigenous organic whole seeds: Amaranth, Quinoa, Buckwheat, Chia and Millet (which some think of as also a grain). The Aztec people developed amaranth; the Incas raised Quinoa, while buckwheat was native in Asia, parts of Europe and the USA. Chia is a revered seed that is native to central and southern Mexico and Guatemala. Millets are a group of indigenous small-seeded grasses, especially known in Africa and Asia but are cultivated and enjoyed all over the world.

These ancient seeds have been with us for thousands of years. The Be Regular five seeds are grown organically in the USA, and through a patented high pressure, heat-shearing process, the soluble fiber and nutrients of the five seeds are released to offer an ideal amount of plant-based protein, complex carbohydrates with low glycemic index, gentle dietary fiber, vitamins and minerals, all easily digested.

Quinoa (Chenopodium quinoa) was revered as sacred by the Incas, and rightly so as it is considered to be a super food. The quinoa plant was cultivated along the Andes for the last 7000 in challenging environments developing into highly nutrient seed (Vega-Gálvez  et al., 2010). Uniquely balanced in all nine essential amino acids needed for tissue development in humans, it is one of the best plant sources of proteins, with protein content of 15%, dietary fiber, vitamins, minerals, vitamin e, and omega oils (Abugoch, 2009; Graf et al., 2015; Nowak et al., 2016). Quinoa is higher in calcium, phosphorus, magnesium, potassium, iron, copper, manganese, and zinc than wheat, barley, or corn. Quinoa is one of nature’s most complete foods. It’s glycemic load is 18. Since Quinoa is gluten free, it is a healthy dietary fiber for those who suffer celiac disease (Filho et al., 2017; Alvarez-Jubete et al., 2009). Because of its low glycemic index, quinoa and buckwheat offer an important nutritious food and dietary fiber to improve insulin resistance and offer glycemic control for type 2-diabetes (Gabrial et al., 2016). Quinoa and amaranth are also shown to have high amounts of antioxidant activity, phenolic and flavonoids power, and hence believed to offer anti-inflammatory and antioxidant potential (Nsima et al., 2008; Tang et al., 2016, 2015).*

Amaranth (Amaranthus hypochondriacus) was used by the Aztecs both for food and in their religious ceremonies. It has 12% protein and is high in lycine and methionine (amino acids), fiber (three times the fiber of wheat), iron (five times that of wheat), K, P and Ca (two times more than milk), Vitamin A and C. It is 90% digestible. Amaranth’s glycemic load is 21 (Mota et al., 2016; Nascimento et al., 2014). Amaranth is shown to have high dietary fiber for daily regularity (Lamothe et al., 2015), and is an excellent fiber for celiac disease (Ballabio et al., 2011). Amaranth confers many other health benefits, including decreasing plasma cholesterol levels and stimulating the immune system (Caselato-Sousa et al., 2015; Soares  et al., 2015; Czerwiński et al., 2004), and antioxidants and phenols to protect and support the liver (López et al., 2011). Amaranth is also found in research to contain phytochemical compounds as rutin, nicotiflorin, and peptides that offer antihypertensive and anticarcinogenic activities (Maldonado-Cervantes et al., 2010; Silva-Sánchez et al., 2008).*

Chia (Salvia hispanica L.) is a magical whole seed. It’s use as energy, life sustaining food dates back 5, 500 years. It is 20% protein, 25% dietary fiber, has an unusually high level of omega-3 and omega-6, vitamins, minerals and high source of antioxidants (Marchinek & Kreipcio, 2017; Chicco et al., 2009; Ulah et al., 2016). Aztec warriors subsisted primarily on Chia. It is called the running food: Native Americans running from the Colorado to the California coast to trade turquoise for seas shells would only bring Chia seeds for their nourishment (Sreeremya, 2017; Kreiter, 2005). Chia’s glycemic load is 1. Chia is shown in research to have good protein quality, improves lipid profiles and supports the liver (da Silva et al., 2016; Jin et al., 2012; Mohd Ali et al., 2012). The ancient seed of Chia is a great source of dietary fiber, a benefit for the whole digestive system (Ullah et al., 2016).*

Be Regular can be mixed with Beta Glucan for the added benefit of oat beta glucan (99.98% gluten free) and red beet root for added dietary fiber and probiotics or taken with the Original Synbiotic Formula (100% gluten free) to add inulin fiber from chicory root and our excellent probiotics for daily regularity.