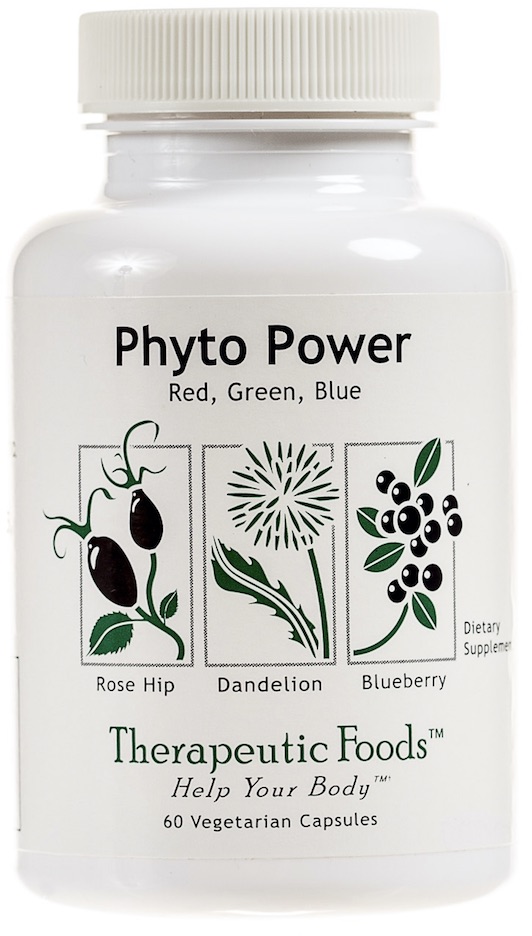 Phyto Power is comprised of several species of wildcrafted blueberries, Rose hip, and Dandelion, including their leaves, stems, roots, and flowers. Growing wild and strong in remote areas of Alaska, these berries and plants are handpicked at the peak of their phytonutrient potential. For centuries, indigenous tribes of Alaskan Natives have used these power-filled berries and plants for their daily nourishment as well as ceremonial and medicinal purposes.

Phyto Power is indeed powerful. In fact, Dinstel et al. (2013) found the antioxidant levels of Alaska’s wild berries to be extremely high, ranging from 3 to 5 times higher in ORAC values than cultivated berries from 48 other states. For example, cultivated blueberries have an ORAC scale of 30. Alaska wild dwarf blueberries measure 85. When the berries were dehydrated, per gram the ORAC values increased.

The Alaskan red Rose hip fruit and seeds, blue-purple Blueberries with twigs and leaves, and the Dandelion’s green leaves, stems, roots and yellow flowers are filled with potent phytonutrients. These vibrant and nutritious phytochemicals protect and enhance the health of both plants and humans (Joseph, Nadeau, & Underwood, 2003). James Duke’s (2000) substantial USDA phytochemical database illustrates the mechanism of the world of plants in the support and maintenance of our health (p. 2).

Scientific evidence links the lack of sufficient nutrients and colorful phytochemicals in our daily diets to the rise of chronic inflammation, one of the causes of metabolic syndrome, which includes cardiovascular, type 2 diabetes, as well as various cancers (Joseph, 2003; Ridker et al., 2000, 2003; Kristo et al., 2016, Ovadje et al., 2016, respectively). For this reason, García-Lafuente et al. (2009) conclude that flavonoids from berries and plants behave as anti-inflammatory agents in our body, calling for more research on the implication of these effects as protection against cancer and cardiovascular issues.

The effect of Blueberries, Rose hip, and Dandelion on Metabolic Syndrome’s risk markers is well documented and researched (Choi et al., 2010; Basu et al., 2012). For example, Andersson et al. (2011) demonstrated in a randomized, double-blind, crossover study* with 31 obese individuals that daily consumption of rose hip (drink) significantly decreased plasma cholesterol and systolic blood pressure, effectting the risk markers of type 2 diabetes and cardiovascular disease. In 2012, Andersson et al. conducted a study with lean and obese mice that were fed high-fat diet and a dietary supplement of rose hip powder. The supplement of rose hip prevented and reversed the increase in body weight. Andersson et al. (2012) concluded that rose hip supports the prevention of diabetic state in the mouse and that downregulation of the hepatic lipogenic program is one of the mechanisms underlying this antidiabetic effect.

Although the exact mechanisms and reasons (the why) of these promising effects are still in the process of discovery, the findings suggest a regular habit of dietary supplementation with these plants and berries.

For further study of the Rosa canina see Chrubasik et al. for a systemic review and clinical efficacy of the Rose hip (2008; 2006, respectively).

For further study of the Taraxacum (Dandelion), see Schütz, Carle, & Schieber (2006) for a systemic review on its phytochemical and pharmacological profile.

The hormetic mechanism of phyto-nutrients is an exciting area of research. Scientists have discovered that small amounts of phytochemicals offer much more than nutrients. Phytochemicals offer a hormetic mechanism; a stimulation of many pathways in our body that prevents, repairs, or reverses aging and disease (Lee et al., 2014; Davinelli et al., 2012). The concept of hormesis is defined as an adoptive response of cells and organism to low dosages of phytochemicals. This adoptive response stimulates a beneficial effect in the body (Mattson, 2008, 2008a). Calabrese et al. conducted many studies on hormetic phytochemicals and vitagenes in aging and longevity, including the effect of antioxidants such as polyphenols on neuro-generation (2012, 2011, 2009). The vitagene network of genes involved in the process of repair and maintenance is thought of as the longevity assurance processes (Rattan, 2004, 1998).

Phyto Power as a dietary supplement offers a regular serving of several species of Blueberries, Rose hip, and Dandelion, including the leaves, stems, flower, and root.

See the Research tab for additional bibliography to further understand the research, findings, application and use of Blueberries, Rose hip, and Dandelion. Visit Resources on the tool bar to find helpful protocols (Library) and summaries (News).

We have developed our products based on scientific research and/or the practical experience of many healthcare practitioners.  There is a growing body of literature on food based nutrition and supplements and their application in support of our health. Please use our products under the advisement of your doctor.Green Facts: