Chronic inflammation is a key risk factor to the growing degenerative diseases we are facing today.

The No. 7 Systemic Booster is a foundational product that potentiates many protocols as it is designed to support multiple systems in our body’s ability to overcome chronic inflammation.  Think of the foods, fiber, and probiotics in the No 7 as a communication switchboard that directs the different items in your protocols toward their therapeutic goal. That is the power of foods acting epigenetically (Han. 2007). 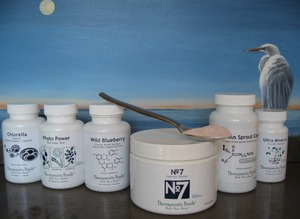 Research on the effects of foods and probiotics found in the No 7 is exciting.

Ford (2014) meta-analysis on the efficacy of prebiotics, probiotic and synbiotics in IBS and CIC (the mean number of stools per week) found that probiotic had beneficial effects on global IBS, abdominal pain, bloating and flatulence.  Their conclusion: probiotics are effective treatments for IBS. Their degrees of effectiveness depending on the species and strains.

The No. 7’s bacteria strains and the supernatant were chosen by our Bulgarian scientists for their effectiveness supporting the inhibition of Clostridial species, as overgrowth of Clostridia is found to create a serious GI tract inflammatory problem (Kounev 2007).  The inulin, berries and fruit provides the prebiotic for the inflammatory reducing-strain of acidophillis, casei and longum.  Inulin is very bifidogenic.

Fruit and berry polyphenols provide a myriad anti-inflammatory actions.  They perform as anti-oxidants, anti-inflammatories, anti-microbials, they protect against the diseases of aging.  They are also hormetic, that is they behave like hormones, epigenetically activating endogenous defense systems (Han. 2007).

Colombo’s (2013) research demonstrated the anti-inflammatory activity of pomegranate in the gastrointestinal tract.  Pomegranate is shown to help with gastritis.

Howatson et al. (2009) determined the efficacy of a tart cherry juice in aiding recovery and reducing muscle damage, inflammation and oxidative stress.  The cherry juice appears to provide a viable means to aid recovery following strenous exercise by increasing total antioxidative capacity, reducing inflammation, lipid peroxidation and so aiding in the recovery of muscle function.  There is much anecdotal evidence for tart cherry reducing the pain of arthritis.

Regarding the nutriceutical contribution within the No. 7, the Fructo Borate Complex contributes to inflammatory reduction by a variety of mechnisms.  Boron downregulates over zealous immune cells for unloading their oxidative bursts into inflamed joints.  Boron also decreases blood levels of CRP and increases blood levels of Vitamin D3. We also add extra Vitamin D3 to No. 7 at 400 IU per tsp (Scorei et al., 2011).

L- Carnosine is an exciting anti-aging molecule, much has been said and researched about it.  In short, carnosine works as an antioxidant to prevent the formation of oxidized sugars, also called Advanced Glycosylation End-products or AGEs. The less AGEs in your body the younger your body feels (Asif et al., 2000).

We have developed our products based on scientific research and/or the practical experience of many healthcare practitioners.  There is a growing body of literature on food based nutrition and supplements and their application in support of our health.  Please  use our products under the advisement of your doctor.

The No. 7 Systemic Booster is meant to be taken on a regular basic as not only your gastrointestinal probiotic/prebiotic supplement but as your multiple for all of the body’s systems—as a anti-inflammatory, healthy aging product.

The suggested dose is one teaspoon daily.

The Bulgarian probiotics and their Supernatant are exceptional contributors within the army of synbiotic organisms in the gut microbiome towards the reduction of GI tract inflammation.

Is not investment into new energy a smart investment, the right investment?  Even before December arrived, 2015 had proven a record breaking year for corporate purchasing of large scale wind and solar energy.
Inflammatory Support No. 7 Systemic Booster Therapeutic Food Supplements